This plaster copy was acquired in 1897, cast from an original antique Roman work completed in the late classical style of the Greek sculptor Lysippos. The marble was found in Hadrian's villa outside Rome in 1790 where it was purchased by the 1st Marquis of Lansdowne, who negotiated peace with the Americans in the War of Indepenence. It is now in American ownership, though still honoured with its 'Lansdowne' name, and is on public display at The Getty Villa in Malibu, California.

The statue was fragmented when rediscovered, and completely restored as fragmentary sculptures did not appeal to neoclassical taste; the sculptor responsible for this, who was probably Carlo Albacini, completed the statue's missing parts according to the taste of the day. These restorations were removed in the 1970s (meaning this cast is technically out of date) and it was detected that the iron and lead pins connecting the restorations to the original caused swelling from corrosion. 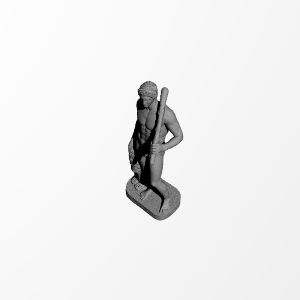 Printed on the Craftbot XL, sliced with Simplify 3D