The Ludovisi Gaul Killing Himself and His Wife at The Palazzo Altemps, Rome

3D
Scan The World
5,653 views 317 downloads
2 collections
Community Prints Add your picture
Be the first to share a picture of this printed object
0 comments

The Ludovisi Gaul Killing Himself and His Wife at The Palazzo Altemps, Rome

The Ludovisi Gaul Killing Himself and His Wife (sometimes called "The Galatian Suicide") is a Roman marble group depicting a man in the act of plunging a sword into his breast, looking backwards defiantly while he supports the dying figure of a woman with his left arm. It is a Roman copy of the early 2nd century AD, of a Hellenistic original, ca 230-20 BC, one of the bronze groups commissioned from Greek sculptors by Attalus I after his recent victories over the Gauls of Galatia. Other Roman marble copies from the same project are the equally famous Dying Gaul, and the less well-known Kneeling Gaul (also uploaded on Scan the World)

The sculpture group made its first appearance in a Ludovisi inventory taken 2 February 1623, and was possibly found in the grounds of the Villa Ludovisi, Rome, shortly before that. The area had been part of the Gardens of Sallust in Classical times, and proved a rich source of Roman (and some Greek) sculpture through the 19th century (Haskell and Penny, 282). Among the last of the finds at Villa Ludovisi, before the area was built over, was the Ludovisi Throne.

The sculpture, now in the Museo Nazionale di Roma, Palazzo Altemps, Rome, was greatly admired from the 17th century. It appeared in engravings in the repertory of sculpture in Rome by Perrier[1] and was codified by Audran[2] as one of the sculptures of Antiquity that defined the canon of fine proportions of the human body. Nicolas Poussin adapted the figure for the group in the right foreground of his Rape of the Sabine Women, now at the Metropolitan Museum of Art (Friedlaender 19 and fig. 108). Visitors and writers of guidebooks found many subjects drawn from Roman history to account for the action: the 1633 Ludovisi inventory lists it as "a certain Marius who kills his daughter and himself",[3] drawing upon the story of a certain patrician Sextus Marius, who in seeking to protect his daughter from the lust of Tiberius, was accused of incest with her.

Giovanni Francesco Susini rendered the group in a small bronze. The marble was copied by François Lespingolafor Louis XIV and may still be seen paired with the Laocoön at the entrance to the Tapis Vert at Versailles; the cast prepared in preparation for the copy was retained at the French Academy in Rome (where it remains). The Ludovisi heirs prohibited further casts, but in 1816–19 Prince Luigi Boncompagni Ludovisi sent plaster casts to thePrince Regent; the Grand Duke of Tuscany, Prince Metternich; and the diplomat at the Congress of Vienna,Wilhelm von Humboldt (Haskell and Penny 284).

You will need to be very careful with the woman's hands and fingers, they will need support to print correctly. Worth noting that they are broken on the original statue. 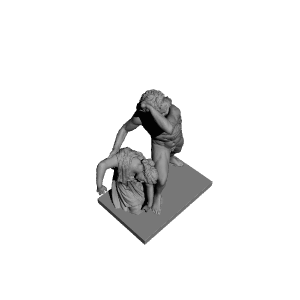 ×
2 collections where you can find The Ludovisi Gaul Killing Himself and His Wife at The Palazzo Altemps, Rome by Scan The World