3D
Scan The World
4,275 views 408 downloads
3 collections
Community Prints Add your picture
Be the first to share a picture of this printed object
0 comments

A sibyl was an ancient prophetic priestess who guarded her writings that foretold the future. The emblem on this sibyl’s necklace is an ancient symbol indicating her mystical powers, though today it is commonly associated with the Jewish Star of David, and with Exodus, and the escape of the Jewish people from slavery. The Libyan Sibyl sits contemplating the fate of the African people, after reading the scroll she holds in her left hand. William Wetmore Story conceived this sculpture after the onset of the Civil War, and his letters confirm that he intended it to be a symbolic condemnation of African American slavery: “She is looking out of her black eyes into futurity and sees the terrible fate of her race. This is the theme of the figure -- Slavery on the horizon.” 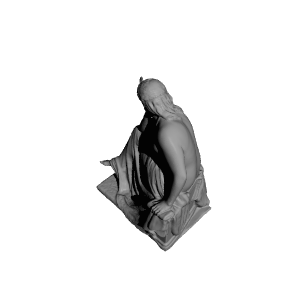 ×
3 collections where you can find The Libyan Sibyl by 3DLirious