The Man From Atlantis

3D
Scan The World
2,196 views 60 downloads
Community Prints Add your picture
Be the first to share a picture of this printed object
0 comments

The Man From Atlantis

Luk van Soom is a sedentary artist Most of his images are from the same clay and turn eventually there to back Every new beginning comes from the same questions.. What is creativity where an idea comes from how do you choose one? form and how evolves the decision by the physical effort of manipulating the masses? making a sculpture in bronze as the Man from Atlantis requires maturity, thorough knowledge and a lot of labor. from the Creation Universe Van soom arise strange configurations. They are looking for the origin of things, equipped to float among the stars, to see into the future or past, to overcome gravity. This bizarre figures and ships, fire, water, strange buildings and the stargazers which Van soom complements make their world rely on your imagination, your willingness to dream and invent a story.
Atlantis Man has the same background. With its 4 meters long and the rock or mountain peak where his foot rests, he towers above the passing traffic from. And between buildings and the traffic of the Waterloolaan he is an alien element. He suggests a world almost opposite to that prevailing rhetoric of economy and efficiency. All elements in the vicinity of the image gain as a new positioning, they will relate to the image in a certain way. You can not get around him, he looks like he can get off at any moment from his vantage point, and so has the entire area within its reach and influence.

Difficult print. Much supports needed, be careful with removing, the design can break easily! 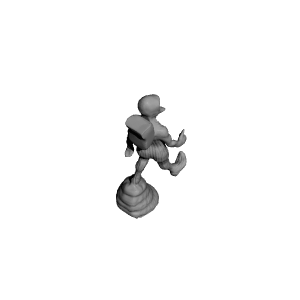