This horse is straining at the bit with nostrils flared and veins bulging. It was likely part of an equestrian sculpture commemorating a powerful leader or general. One of the challenges ancient sculptors faced was how to render a horse that was wild and forceful yet also controlled by its rider.

There is an interesting feature that appears on a number of the surviving equestrian statues from antiquity which is that one ear of the horse is inclined forwards and one backwards. The ear facing forwards is to meet any challenges ahead, the ear turned backwards was to hear the commands or the demands of the rider. So a powerful horse like this adds to the impression of the strength, control and power of the rider. The heavy neck of a stallion, the lips drawn back as the rider applies pressure to the bit, the wrinkles below the horse's jaw as he strains to move forward. It's an utterly naturalistic rendering. You can practically tell what the breed of the horse might be.

The lifesize sculpture once belonged to the powerful rennaissance ruler, Lorenzo de Medici, which stood in the garden of his palace in Florence where many artists admried and copied it. In the 17th century, the horse was turned into a fountain where water spurted from the top of the head.

Possibly originating from Rome, the horse’s head must have been part of an antique equestrian monument. The dating of the work is greatly debated. Recently the technique of the gilding and the style of the modelling have led critics to place the horse’s head towards the end of the Hellenistic age, and hence prior to the first century BC.

It entered the Medici collections in the fifteenth century, and was probably admired and studied by sculptors such as Donatello and Verrocchio who were active in the Medici milieu. In 1495, at the time of its confiscation by the Republican government, the head was in the garden of Palazzo Medici, as confirmed by the confiscation order. Having been returned to Palazzo Medici when the family returned from exile, it was used as an ornamental element for a fountain in the garden of the palazzo of Via Larga.

It is recorded in the inventory of the Guardaroba in 1578, where it proves to be set up in the large courtyard, probably of Palazzo Pitti.

The bronze has remarkable resemblances with another horse’s head now in the National Archaeological Museum of Naples referred to Donatello, who must have been directly inspired by the famous archaeological piece in the Medici residence. Moreover, this could also have been the inspiring model for the equestrian monuments created by Donatello (Gattamelata in Padua) and Verrocchio (Colleoni in Venice).

Scale to size suitable for your printer. I printed this on it's side so I could have at least one good face to take photos of. 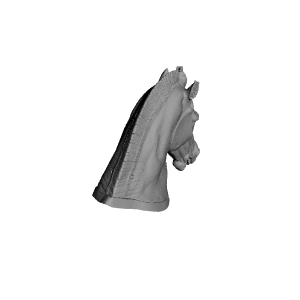