3D
Featured Scan The World
2,759 views 181 downloads
5 collections
Community Prints Add your picture
Be the first to share a picture of this printed object
0 comments

This is part of a set of two reliefs by Pierre Jean David (David d'Angers) depicting the Meeting between General Gobert and The Rebel Leader Pélage in Guadaloupe 1808. The other relief can be downloaded here.

Both David d'Angers and Daumier were politically active and opposed to the monarchy. Their ideological conviction appears in their art. Daumier was primarily known for his political satire drawings, but also performed sculptures. The "emigrants" refer to deported prisoners and refugees in the suites after the 1848 revolution. The sketchy faceless expressions in both works emphasize the feeling of despair and and anonymity. 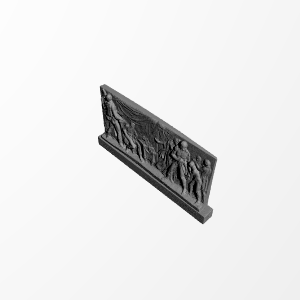