The Mummy of Titos Flavios Demetrios in Ipswich Museum, UK

3D
Scan The World
4,195 views 346 downloads
Community Prints Add your picture
Be the first to share a picture of this printed object
0 comments

The Mummy of Titos Flavios Demetrios in Ipswich Museum, UK

Titos Flavios Demetrios lived and died in Egypt about 2000 years ago in a time when the Roman Empire ruled the Nile Valley. He was a wealthy man born about 400 years after his Greek ancestors settled in Egypt after Alexander the Great conquered it in 305 BC. His three names tell us he was also a Roman citizen. We do not know why he was given citizenship as it is unlikely he ever visited Rome but it certainly made him one of the most important men living in his town of Hawara in the middle of Egypt.

He may have been a Roman citizen and of Greek descent but Titus Flavius Demetrius died an Egyptian and believed he would live in the afterlife with Osiris and the other gods. His body was mummified and an incredible mask made of layers of linen and plaster and covered with gold was placed over his face. 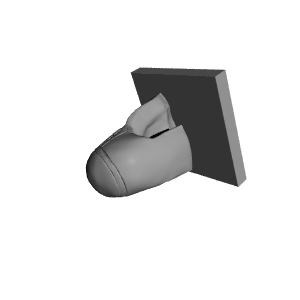 ×
0 collections where you can find The Mummy of Titos Flavios Demetrios in Ipswich Museum, UK by Scan The World