3D
Featured Scan The World
3,107 views 244 downloads
2 collections
Community Prints Add your picture
Be the first to share a picture of this printed object
0 comments

This is a slightly restored plaster copy of a Hellenistic original housed at The Glyptotek in Munich. Although the Greek original is long lost, another version of the same (restored) sculpture is also on permanent display at The Capitoline Museum in Rome.

The statue of the Old Drunkard was created in the Hellenistic period, but the exact time of its creation cannot be determined. In scholarship the Old Drunkard is generally dated to the late third century BC on the basis of stylistic parallels. The bulky, blocky composition and the pyramidal structure is comparable to the Scythians of the Marsyas Flayer Group, which is dated to the first half of the second century BC and to the figure of the Goose strangler, which is dated to the middle or later third century BC. 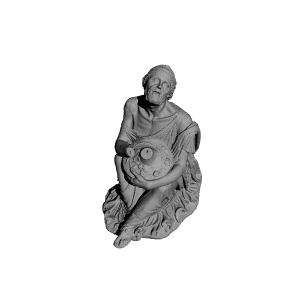