The Piranesi Vase at The Hermitage Museum, St Petersburg

3D
Scan The World
2,613 views 137 downloads
Community Prints Add your picture
Be the first to share a picture of this printed object
0 comments

The Piranesi Vase at The Hermitage Museum, St Petersburg

According to legend, this vase was found in the ruins of the Villa of Emperor Hadrian in Tivoli. Actually, the vase was skilfully composed of various fragments at the workshop of Giovanni Battista Piranesi, a famous Italian engraver and antiquarian. The body of the vase was formed of an Ancient Rome puteal, a stone barrier around a well dating back to the era of the Flavian emperors (third quarter of the 1st century AD). It has the following new parts: a cover and a rim, numerous insets on the handles, a mask of a Silenus and a pedestal. The bottom of the vase, the handles shaped like vine sprouts and the bases of the handles shaped like a Silenus protome were skilfully chosen by Piranesi and did not belong to a single object. This fact is clearly seen, for example, in the way the fragment with a protome is cut into the bottom. These fragments can be attributed to neo-Attic craftsmen and are dating to the 1st century BC. If the fragments were indeed found in Tivoli, they would have belonged to the decoration of rich villas before the time of Emperor Hadrian. 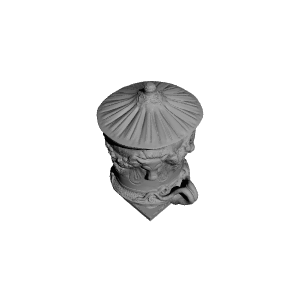 ×
0 collections where you can find The Piranesi Vase at The Hermitage Museum, St Petersburg by Scan The World