3D
Scan The World
8,543 views 654 downloads
2 collections
Community Prints Add your picture
Be the first to share a picture of this printed object
0 comments

Having been struck by Cupid's arrow, Pluto, the God of the Underworld, caught sight of Proserpina picking flowers in a meadow. Immediately inflamed with love, he carried her off to his kingdom.

The Rape of Proserpina was brought to England in 1896 by the future 1st Viscount Astor, who brought it to Cliveden House, Buckinghamshire. The 2nd Viscount Astor gave Cliveden and its sculpture to the National Trust in 1942. The group was removed for conservation in 1989, following which it was decided to place it on long-term loan in the Museum.

De' Rossi worked for several years in Rome before returning to Florence in 1560, where he was employed by the Medici Grand Dukes. The group was cast in one piece, as described in contemporary treatises, but still a difficult technical achievement at that time for such a large sculpture. 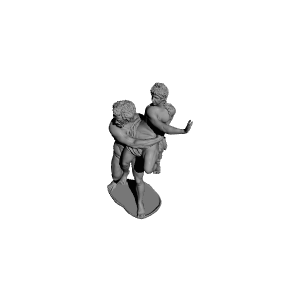 ×
2 collections where you can find Pluto and Proserpina by vam