3D
Featured Scan The World
23,643 views 3,606 downloads
31 collections
Community Prints Add your picture
Be the first to share a picture of this printed object
0 comments

The Rape of the Sabine Women (Latin: Sabinae raptae) is an episode in the legendary history of Rome, traditionally dated to 750 BC, in which the first generation of Roman men acquired wives for themselves from the neighboring Sabine families. The English word rape is a conventional translation of the Latin raptio, which in this context means "abduction" rather than its prevalent modern meaning in English language of sexual violation. Recounted by Livy and Plutarch (Parallel Lives II, 15 and 19), it provided a subject for Renaissance and post-Renaissance works of art that combined a suitably inspiring example of the hardihood and courage of ancient Romans with the opportunity to depict multiple figures, including heroically semi-nude figures, in intensely passionate struggle. Comparable themes from Classical Antiquity are the Battle of the Lapiths and Centaurs and the theme ofAmazonomachy, the battle of Theseus with the Amazons.

The sculpture by Giambologna (1579–1583) that was reinterpreted as expressing this theme depicts three figures (a man lifting a woman into the air while a second man crouches) and was carved from a single block of marble. This sculpture is considered Giambologna's masterpiece. Originally intended as nothing more than a demonstration of the artist's ability to create a complex sculptural group, its subject matter, the legendary rape of the Sabines, had to be invented after Francesco I de' Medici, Grand Duke of Tuscany, decreed that it be put on public display in the Loggia dei Lanzi in Piazza della Signoria, Florence. True to mannerist densely packed, intertwined figural compositions and ambitious overinclusive efforts, the statue renders a dynamic panoply of emotions, in poses that offer multiple viewpoints. When contrasted with the serene single-viewpoint pose of the nearby Michelangelo's David (also uploaded to MyMiniFactory and Scan The World), finished nearly 80 years before, this statue is infused with the dynamics that lead towards Baroque, but the tight, uncomfortable, verticality— self-imposed by the author's virtuosic restriction to a composition that could be carved from a single block of marble— lacks the diagonal thrusts that Bernini would achieve forty years later with his Rape of Proserpina and Apollo and Daphne, both at the Galleria Borghese, Rome.

The proposed site for the sculpture, opposite Benvenuto Cellini's statue of Perseus, prompted suggestions that the group should illustrate a theme related to the former work, such as the rape of Andromeda by Phineus. The respective rapes of Proserpina and Helen were also mooted as possible themes. It was eventually decided that the sculpture was to be identified as one of the Sabine virgins.

The work is signed OPVS IOANNIS BOLONII FLANDRI MDLXXXII ("The work of Johannes of Boulogne of Flanders, 1582"). An early preparatory bronze featuring only two figures is in the Museo Nazionale di Capodimonte in Naples. Giambologna then revised the scheme, this time with a third figure, in two wax models now in the Victoria and Albert Museum, London. The artist's full-scale gesso for the finished sculpture, executed in 1582, is on display at theAccademia Gallery in Florence.

Bronze reductions of the sculpture, produced in Giambologna's own studio and imitated by others, were a staple of connoisseurs' collections into the 19th century. 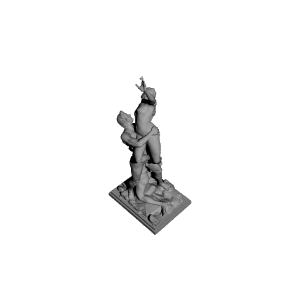 ×
31 collections where you can find The Abduction of the Sabine Women in Florence, Italy by Scan The World