3D
Scan The World
6,346 views 523 downloads
3 collections
Community Prints Add your picture
Be the first to share a picture of this printed object
0 comments

Michelangelo carved six figures of slaves for the tomb of Pope Julius II. The project to create a vast monument was eventually scaled down. Michelangelo gave two of the figures to a Florentine exile in France, who presented them to the king. In 1794 The Rebellious Slave an the Dying Slave (also uploaded to the Scan The World archive) were bought by the Fench state. They were placed in the Louvre, where they were fundamental to the appreciation and knowledge of Michelangelo's work outside Italy. This is a plaster cast that can be found in the V&A's Cast Courts in London.

One of a series of six "slaves" executed by Michelangelo for the tomb of Pope Julius II (Pope 1503-13), of which two are now in the Louvre and four are in the Accademia di Belle Arti in Florence. This figure, together with the Dying Slave (V&A cast museum no. 1863-15), was executed for the second project (1513) for the tomb. In this scheme, Michelangelo planned to place them on either side of the Moses (V&A cast museum no. 1858-278). The project was never completed in this form. Around 1546, Michelangelo gave these two statues to Ruberto Strozzi, a Florentine exile in Lyon, who in turn presented them to King Francois I of France. They were given by King Francois I to Conétable Anne de Montmorency and thereafter passed through the hands of several members of the Montmorency and Richelieu families. In 1794, the Rebellious and Dying Slaves were purchased for the French state, and have been preserved in the Musée du Louvre ever since. 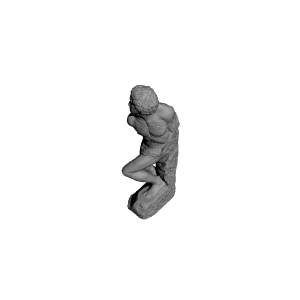 ×
3 collections where you can find The Rebellious Slave by vam