3D
Scan The World
4,996 views 696 downloads
4 collections
Community Prints Add your picture
Be the first to share a picture of this printed object
0 comments

In Dante’s Divine Comedy, the shades, i.e. the souls of the damned, stand at the entrance to Hell, pointing to an unequivocal inscription, “Abandon hope, all ye who enter here”. Rodin made several studies of Shades, before finally deciding to assemble three identical figures that seem to be turning around the same point. He placed them on top of The Gates, from where they could gaze down at the spectator, then had them enlarged to create a monumental independent group in 1904.

As in Adam , whose twisting, tormented pose The Three Shades have borrowed, Michelangelo’s influence is obvious here. The angle at which the heads fall downward is so exaggerated that the necks and shoulders form an almost horizontal line. It was through anatomical distortion like this that Rodin achieved an expressive force quite unparalleled in his time 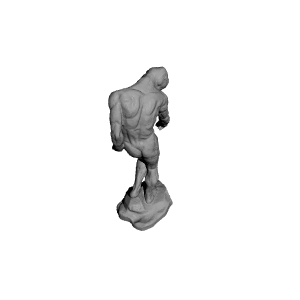 ×
4 collections where you can find The Shade at The Musée Rodin, Paris by Musée Rodin