The Shadow is not just Niels Hansen Jacobsen's principal Symbolist work; it is also an important piece within European art of the time.

In an original move, Hansen Jacobsen translates his concept of death into a sneaking, creeping figure so bound with the underworld that it merges with the soil.

A horizontal figure whose liquid, contour-less shape marks a complete break with sculptural tradition and its celebration of monumental and clearly delineated shapes. With his consistent dissolution of shapes, Hansen Jacobsen does away with the traditional frameworks for the physical appearance of sculpture.

Indicative of the fascination with death that Hansen Jacobsen shared with so many others of his day, the artist let the sculpture be accompanied by this poem:

Hansen Jacobsen's radical and unreal idiom left most of his contemporaries wondering, and he did not receive great recognition in Denmark. After a number of years in Paris, the artist eventually settled in his hometown of Vejen. Here, ceramic works in particular served as a vehicle for his original ideas. 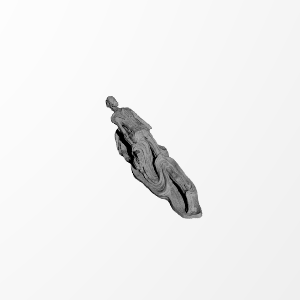