This work is a copy of The Sleeping Ariadne, a Roman Hadrianic copy of a Hellenistic sculpture of the Pergamene school of the 2nd Century BC. The Roman copy is considered one of the most renowned sculptures of Antiquity. The reclining figure in a chiton bound under her breasts half lies, haf sits, her extended legs crossed at the calves, her head pillowed on her left arm, her right thrown over her head.

She was initially identified as Cleopatra, because of the snake bracelet on the upper left arm, which was taken for the asp by which she died, supportive narrative could easily be brought to bear. The work was subsequently transmitted from Antiquity to High Renaissance and later painters and sculptors; Michelangelo drew from the sculpture' wrapping of the arms around the head in his Night and Dawn allegories.

Johann Joachim Winckelmann noticed that the snake actually represented a serpentine-form bracelet, and that the sleeping figure had no reason to be called a Cleopatra; she was a sleeping nymph, he suggested, or a Venus. Ennio Quirino Visconti made the secure identification as Ariadne, based on similar motifs in carved gems and sarcophagus reliefs.

This work is a more modern adaption of the Roman copy, selected by Primaticcio to be molded for plaster copies and then cast in bronze for Francis I at the Chateau de Fontainebleau. In the process, the pose was slightly adjusted, and the sleeping nymph's limbs were gently lengthened, to accord better with French Mannerist canons of female beauty. From the bronze at Fontainebleau numerous copies and reductions were made. 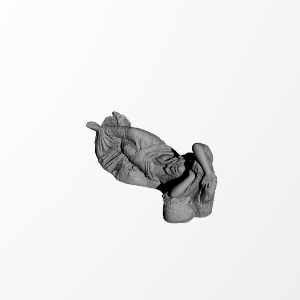