3D
Scan The World
2,869 views 163 downloads
3 collections
Community Prints Add your picture
Be the first to share a picture of this printed object
0 comments

The 'Sleeping Shepherd Boy' was Gibson's first original life-size work which he began in 1818 while working in Canova's studio. The first marble version was commissioned by Lord Geroge Cavendish in 1824 and the present work was purchased by Lord Prudhoe later Duke of Northumberland, a well known collector of classical marbles. A third version was mede for a Mr Lennox of Neq York and the subject was exhibited at the 1835 Royal Academy. The work is closely base on Canova's "Sleeping Endymion" (1805) and Thorvaldsen's 'Shepherd Boy and Dog' (1817); it is one of Gibson's most elegant compositions. 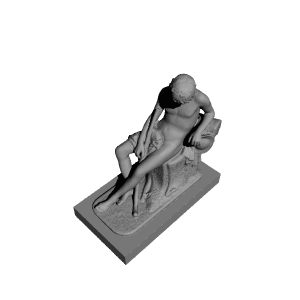