In the axis further west from the Monolith is a Sundial, completed around 1930, and finally the Wheel of life, modelled in 1933-34. The wheel is a symbol of eternity and is here executed as a garland of women, children and men holding on to each other. In a sense, this sculpture sums up the dramatic theme of the entire park: Man's journey from cradle to grave, through happiness and grief, through fantasy, hope and wishes of eternity.

Clay was Vigeland’s chosen material. In soft clay he could work quickly, and it was therefore an excellent medium for his tremendous energy and inspiration. He would free-hand model the full-scale sculptures based on small three-dimensional sketches. He occasionally used a grid to guide him, as when he sculpted the full size clay model for The Wheel of Life (see picures showing the process).

The Wheel of Life was modelled between September 1933 and February 1934. Then a master copy was cast in plaster. The method of plaster casting used is called waste moulding because the mould is chiselled away to release the master copy.

Vigeland began by making a small-scale model of the Wheel of Life. His smiths made an iron armature in full scale: three metres in diameter, using a grid over the model. They bound wooden crosses with steel wire to stop the clay from slipping when the sculpture was built up around the armature. Vigeland modelled by hand, but also used several types of rudimentary tools. Points from the plaster sketch were transferred to the clay model using the grid, a meter ruler and callipers. Finally the sculpture was reworked with finer tools to achieve the desired surface.

While the clay was still soft and damp, thin metal plates (shims) were stuck into the clay surface of the sculpture before it was covered with a thin layer of coloured plaster. The shims divided the plaster mould that was to be made from the clay original into a main mould and several minor moulds. Then an armature reinforcement was made by bending iron bars and attaching them with plaster to the different parts, before more plaster, (uncoloured) was put over the initial layer of plaster. The outer edges of the shims could then be seen as seams in the surface of the mould.

The minor moulds were marked before they were prised loose with the help of several sorts of thin specialist tools and water. The clay was then dug out of the main mould. Subsequently the inner iron armature was removed. The main mould and all the minor moulds were cleaned and reassembled. The casting mould was ready to be used.

The inside of the mould was coated with a release agent and then covered with an approximately two cm layer of plaster. The plaster cast was reinforced internally with wooden supports and sacking. When the plaster set, the mould was hacked away with a blunt chisel and wooden mallet. The result was a master copy identical to the clay original.

Despite the work on the Wheel of Life being technically challenging, Vigeland was pleased with the result and is quoted as saying “I have never been as accomplished as I am now.” Source of information: Vigeland Museum Website Gustav Vigeland (11 April 1869 – 12 March 1943), né Adolf Gustav Thorsen, was a Norwegian sculptor. Gustav Vigeland occupies a special position among Norwegian sculptors, both in the power of his creative imagination and in his productivity. He is most associated with the Vigeland installation (Vigelandsanlegget) in Frogner Park, Oslo. He was also the designer of the Nobel Peace Prize medal.

The Vigeland Park is the world's largest sculpture park made by a single artist, and is one of Norway's most popular tourist attractions. The park is open to visitors all year round.
The unique sculpture park is Gustav Vigeland's lifework with more than 200 sculptures in bronze, granite and wrought iron. Vigeland was also in charge of the design and architectural layout of the park. The Vigeland Park was mainly completed between 1939 and 1949.
Most of the sculptures are placed in five units along an 850 meter long axis: The Main gate, the Bridge with the Children's playground, the Fountain, the Monolith plateau and the Wheel of Life.

Buy a print of this sculpture from Blue Banana Factory. 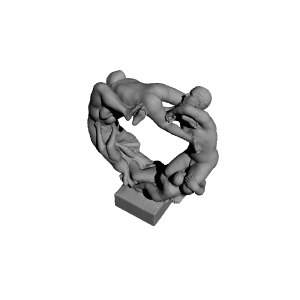 ×
15 collections where you can find The Wheel of Life at Vigeland Sculpture Park, Norway by Scan The World
×
Creative Journeys
@Creative Journeys
0
Printed on: Tevo Tarantula
Material: PLA
Posted at: 27th January 2022