The White Lion of Mortimer

3D
Scan The World
1,840 views 172 downloads
1 collection
Community Prints Add your picture
Be the first to share a picture of this printed object
0 comments

The White Lion of Mortimer

This sculpture depicts The White Lion of Mortimer, one of the Queen's Beasts.

The White Lion of Mortimer descends to the Queen through Edward IV. The shield shows a white rose encircled by a golden sun, known heraldically as a ‘white rose en soleil’ which is really a combination of two distinct badges. Both of these appear on the Great Seals of Edward IV and Richard III, and were used by George VI when Duke of York. Unlike the Lion of England, this beast is uncrowned 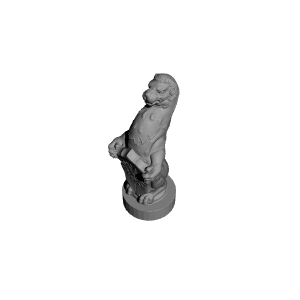