3D
Scan The World
2,000 views 92 downloads
1 collection
Community Prints Add your picture
Be the first to share a picture of this printed object
0 comments

This stela was excavated between 2008 and 2009. The old man carries a crosier, similar to the Mexican representations of Quetzalcoatl and in front of him is a snake and a probable calendar date. Highlight the butterfly wing on your back. In Nahua thought, the butterfly was linked to the fire-war complex, as the warriors who died in combat reached the House of the Sun and then returned to earth turned into butterflies. But fire is also linked to the civilizing process of humanity. Thus, it is feasible that this scene alluded to the enthronement of a primal dignitary of Tula, whose date perpetuated the event. This interpretation is reinforced because the elder carries a crosier similar to that of Quetzalcoatl, mythic leader of the Toltecs, who symbolically legitimized the rise to power of the leader. 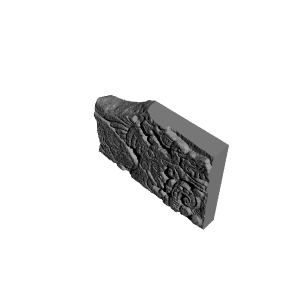