3D
360°
2,784 views 126 downloads
3 collections
Community Prints Add your picture
Be the first to share a picture of this printed object
2 comments

Inspired by Star Wars Galaxy's Edge - the new land at Disneyland and Disney's Hollywood Studios - this cap turns any regular soda bottle into a detonator from a galaxy far, far away.

Drink like Rey or Kylo Ren from the comfort of our own solar system!

I won't be able to visit Walt Disney World until late 2021, but the Star Wars themed Coca-Cola bottles of Galaxy's Edge have been calling to me. Rather than spend tons of money on eBay to get one, I decided to print my own cap. AND I can use it on a Pepsi bottle instead. ;-)

This model relies on chetjohnston's bottle cap wrench from Thingiverse to tightly grip the ridges along a standard cap. The hole at the top should allow you to free a cap from the ridges using a pen or pencil, so you can reuse the cap on a new bottle.

This print is designed to be oriented top-down on the print bed. 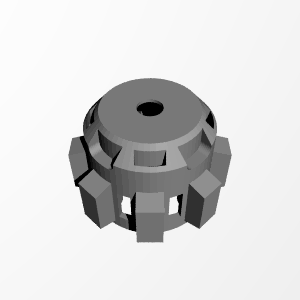