This is for the MAMSS x McGill competition and I am from McGill University!

These three engineering disasters are known by every mechanical engineer. Textbooks and professors mention them incessantly (and with good reason), as they provide extremely important lessons that all mechanical engineers must remember.

The de Havilland Comet disasters resulted in large tears in the plane's fuselage during flight on 26 occasions. 13 of those occasions were fatal, and contributed to 426 fatalities. The comet was at the forefront of jet propulsion technology, and was flying at a much greater height than most aircraft of the time. Ultimately, its square windows were the root of its downfall. The sharp corners on the windows created stress concentrations in the fuselage, and paired with the repetitive pressurization and de-pressurization of the cabin, resulted in earlier than expected fatigue failure. These incidents brought to light the importance of recognizing stress concentrations and fatigue failure.

The Liberty Ships were a class of cargo ships built in the US during the second World War. Many were built using a new welding fabrication technique instead of the traditional riveted plate fabrication. The cold temperatures in the North Atlantic reached such a point where the steel in the hull transitioned from ductile to brittle, which was not accounted for. In brittle materials, cracks propagate very easily (like in glass or porcelain). Small cracks in the hulls of the ships grew unimpeded since the hull was welded, not riveted. If the hull were made of riveted plates, most of the cracks would stop at the edges of the plates. The result was nearly 1500 instances of significant brittle fractures in the hulls of Liberty Ships. In fact, many cracks originated at the square edge of a hatch, again bringing us back to stress concentrations. Even more surprising is that three ships broke fully and cleanly in half without warning! This was an important lesson to mechanical engineers on brittle fracture, crack propagation, and temperature effects on the ductility of metals.

If I had a dime for every time I was shown the Tacoma Narrows bridge video in class… I’d have a lot of dimes! The Tacoma Narrows bridge experienced a complete failure as a result of wind which caused the bridge to oscillate violently and uncontrollably. This is known as resonant vibration. All objects have a frequency that they naturally “want” to vibrate at. It turns out that on that day the winds were at the perfect speed and direction to push the bridge to the point of resonance. It violently twisted back and forth, at angles up to 45 degrees, and bent up and down. Eventually, the suspension bridge collapsed completely and the roadway fell into the water. The disaster is a lesson on the importance of the effects of vibrations and harmonic and resonant oscillation.

This 3D print shows three representations of these disasters extending from the head of a bolt. The three radial lines on the bolt indicate a grading of 5 as defined by the SAE (Society of Automotive Engineers). This grading is an indicator of the bolt’s strength. The head of the bolt is made quite flat to reduce the material needed in printing. It is 150mm wide (point to point), and 15mm in depth (maximum). 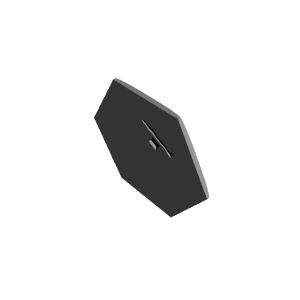