3D
Scan The World
2,715 views 66 downloads
Community Prints Add your picture
Be the first to share a picture of this printed object
0 comments

This group, made in 1947-48, was not done especially for the position it now occupies in Battersea Park.

The project was on the way before the Contemporary Art Society thought of commissioning it. The Museum of Modern Art in New York had said that they wanted from me a large work, and I had their request in mind when I decide to carve this group in Darleydale stone, which stone I chose because it would have weathered well and kept clean in the sea air of New York. In the smoke-laden atmosphere of London, especially being near Battersea Power Station, I think the stone will slowly go darker, it may perhaps look very well when nearly black. At present though, in its in-between stage, it is looking rather dirty. But it is no use being over-concerned about its surface appearance for the next few years... When the Contemporary Art Society decided that they wanted to offer it to the London County Council Parks Committee, The Museum of Modern Art agreed to wait for a large work, and later they had a cast of the Stevenage Family Group. The three figures were sited when they were shown in the first open air sculpture exhibition at Battersea Park, but they couldn’t remain there because the tree to the right of one of them was rotten, and after it was felled the site lost a good deal of its attractiveness. But I was very happy about that original situation. The slight rise over-looking an open stretch of park and the background of trees emphasised their outward and upward stare into space. They are the expression in sculpture of the group feeling that I was concerned with in the shelter drawings, and although the problem of relating separate sculptural units was not new to me, my previous experience of the problem had involved more abstract forms; the bringing together of these three figures involved the creation of a unified human mood. The pervading theme of the shelter drawings was the group sense of communion in the three figures... I wanted to overlay it with the sense of release, and create figures conscious of being in the open air, they have a lifted gaze, for scanning distances. 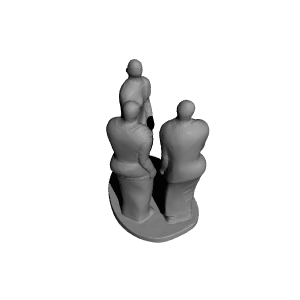 ×
0 collections where you can find Three Standing Figures at Battersea Park, London by Scan The World