3D
Scan The World
3,171 views 389 downloads
3 collections
Community Prints Add your picture
Be the first to share a picture of this printed object
0 comments

The subsequent enlargement further highlights the curve of the arched back and the bust. The fin-like protuberances visible on the hips are what remains of the hands on the original small figure. Rodin decided to retain them as traces of a previous state and his working method. These processes of fragmentation and enlargement, other aspects of the artist’s modernity, show how well Rodin exploited all the potential of a piece of sculpture and modified our perception of it.

Such an approach was part of the investigations, carried out by the artist in 1890-95, into fragmenting and reducing forms to the essential. For Rodin, it was not a question of leaving a work unfinished, or of leaving a figure incomplete, but of eliminating everything that was not strictly necessary in order to make its expressiveness more forceful. This no doubt explains why the torso would be so influential in the 20th century. 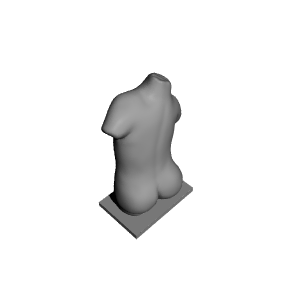 ×
3 collections where you can find Torso by Scan The World