3D
Scan The World
3,820 views 153 downloads
Community Prints Add your picture
Be the first to share a picture of this printed object
0 comments

The free approach to form, sources and materials that can be seen in Rodin's work anticipates developments in later 20th-century sculpture. He studied and collected classical art, and later in life made assemblages. Here he has placed his bronze torso on a dramatically different plaster cast of a classical marble pedestal from his own collection.

The truncation of the torso makes it more abstract and less naturalistic. Rodin sometimes asked his models to sit on the ground with their back to him, arms and legs outstretched in front. 'In that position'…, he said, …'the back, which narrows at the waist and enlarges at the hips resembles an exquisitely curved vase, an amphora which contains within its flanks the life of the future'. By setting the torso on a classically-derived plinth, Rodin invited viewers to see the bronze as something set apart to be admired, just like an ancient Greek vase.

A recent inspection of the bronze torso has revealed the presence of many of the metal pins that held the sand core in position during the casting process. 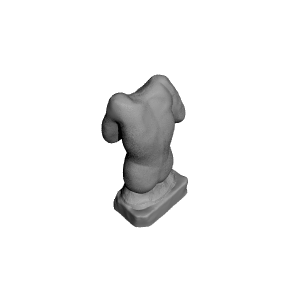