Torso of an Old Fisherman

3D
Scan The World
1,530 views 67 downloads
Community Prints Add your picture
Be the first to share a picture of this printed object
0 comments

Torso of an Old Fisherman

Aphrodisias (Turkey), baths, acquired in 1905
Marble, Roman, after original around 200 BC

Part of the considerably broader repertoire in Hellenistic large-scale sculpture was the unflinching representation of ageing, the realistic portrayal of corporeal frailty and images of ordinary people, such as fishermen, shepherds, and beggars. The head is a plaster cast of the original, discovered in 1989 in Aphrodisias. 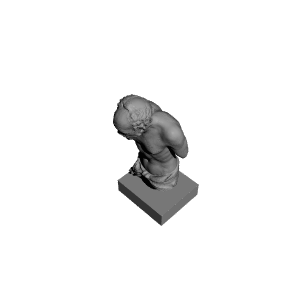