Torso of Aphrodite at The State Hermitage Museum, St Petersburg

3D
Scan The World
2,866 views 179 downloads
Community Prints Add your picture
Be the first to share a picture of this printed object
0 comments

Torso of Aphrodite at The State Hermitage Museum, St Petersburg

In the middle of the 4th century BC the Greek sculptor Praxiteles first depicted Aphrodite, the goddess of love and beauty, naked. This was such a daring innovation that the citizens of Kos, who had commissioned the statue, refused to accept it. The rejected statue was acquired by the citizens of Cnidus in Asia Minor and the Aphrodite of Cnidus, the embodiment of perfect feminine beauty, became a model for many generations of artists in Greece and Rome. The Roman copy in the Hermitage collection goes back to an early Hellenistic original. Only the torso of the statue has survived; its forms convey the beauty and harmony of the mature female body. To meet the taste which prevailed in the 3rd century BC the Hellenistic sculptor made the proportions of the figure lighter and more slender and the lines of the body softer than in Praxiteles's work. 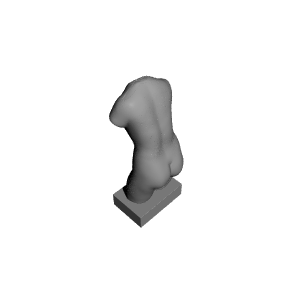 ×
0 collections where you can find Torso of Aphrodite at The State Hermitage Museum, St Petersburg by Scan The World