Toth in the form of a baboon at The Kiev Museum of Art, Ukraine

3D
Support Free Scan The World
4,234 views 262 downloads
5 collections
Community Prints Add your picture
Be the first to share a picture of this printed object
0 comments

Toth in the form of a baboon at The Kiev Museum of Art, Ukraine

Thoth was one of the deities of the Egyptian pantheon. In art, he was often depicted as a man with the head of an ibis or a baboon, animals sacred to him. His feminine counterpart was Seshat, and his wife was Ma'at.

Thoth's chief temple was located in the city of Khmun, later called Hermopolis Magna during the Greco-Roman era (in reference to him through the Greeks' interpretation that he was the same as their god Hermes) and Shmounein in the Coptic rendering, and was partially destroyed in 1826. In that city, he led the Ogdoad pantheon of eight principal deities. He also had numerous shrines within the cities of Abydos, Hesert, Urit, Per-Ab, Rekhui, Ta-ur, Sep, Hat, Pselket, Talmsis, Antcha-Mutet, Bah, Amen-heri-ab, and Ta-kens.

Thoth played many vital and prominent roles in Egyptian mythology, such as maintaining the universe, and being one of the two deities (the other being Ma'at) who stood on either side of Ra's boat. In the later history of ancient Egypt, Thoth became heavily associated with the arbitration of godly disputes, the arts of magic, the system of writing, the development of science, and the judgment of the dead. 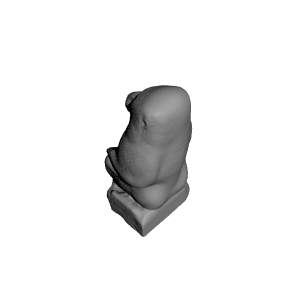 ×
5 collections where you can find Toth in the form of a baboon at The Kiev Museum of Art, Ukraine by Scan The World