3D
Scan The World
3,157 views 505 downloads
1 collection
Community Prints Add your picture
Be the first to share a picture of this printed object
0 comments

This sculpture depicts two figures set apart by several metres, suggesting an unseen narrative. The two large bronze figures have their surfaces painted in oil to convey natural and living figures, a combined technique which revives the tradition of multicolour sculpture, prevalent within ancient sculpture through to the Renaissance period in Europe.

In an interview given by Sean Henry, he said “I decided to create a work in which two figures could stand together as if about to meet whilst walking along a pathway. I chose the location near Westway and hoped it would resonate with people’s day-to-day life in the then very new Paddington Central development.” When asked if there was any dialogue between them he replied ”Yes, there’s a connection between the two and a sense of potential dialogue. You can see that they are about to meet – the standing figure is waiting, alert, while the walking figure remains locked in his own movement and train of thought, he’s yet to look up and realise there’s someone else there.” 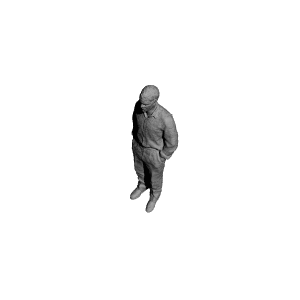