3D
Scan The World
1,517 views 93 downloads
1 collection
Community Prints Add your picture
Be the first to share a picture of this printed object
0 comments

This is an ancient marble bust depicting Solon, an Athenian statesman, lawmaker and poet. He is remembered particularly for his efforts to legislate against a political, economic and moral decline in archaic Athens. His reforms failed in the short term, yet he is often credited with having laid the foundations for Athenian democracy. He wrote poetry for pleasure, as patriotic propaganda and in defence of his constitutional reforms.

Modern knowledge of Solon is limited by the fact that his works only survive in fragments and appear to feature interpolations by later authors and by the general paucity of documentary and archaeological evidence covering Athens in the early 6th century BC. Ancient authors such as Herodotus and Plutarch are the main source of information, yet they wrote about Solon long after his death, at a time when history was by no means an academic discipline. 4th-century orators, such as Aeschines, tended to attribute to Solon all the laws of their own, much later times 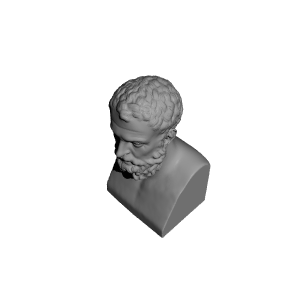 ×
1 collections where you can find Unidentified portrait, the so-called Solon by Scan The World