3D
Scan The World
4,758 views 329 downloads
Community Prints Add your picture
Be the first to share a picture of this printed object
0 comments

The ushabti (also called shabti or shawabti, with a number of variant spellings was a funerary figurine used in Ancient Egypt. Ushabtis were placed in tombs among the grave goods and were intended to act as servants or minions for the deceased, should he/she be called upon to do manual labor in the afterlife. The figurines frequently carried a hoe on their shoulder and a basket on their backs, implying they were intended to farm for the deceased. They were usually written on by the use of hieroglyphs typically found on the legs. Called “answerers,” they carried inscriptions asserting their readiness to answer the gods' summons to work. The practice of using ushabtis originated in the Old Kingdom (c. 2600 to 2100 BCE) with the use of life-sized reserve heads made from limestone, which were buried with the mummy. Most ushabtis were of minor size, and many produced in multiples – they sometimes covered the floor around a sarcophagus. Exceptional ushabtis are of larger size, or produced as a one of-a-kind master work.

Due to the ushabti's commonness through all Egyptian timeperiods, and world museums' desire to represent ancient Egyptian art objects, the ushabti is one of the most commonly represented objects in Egyptology displays. Produced in huge numbers, ushabtis, along with scarabs, are the most numerous of all ancient Egyptian antiquities to survive.

Identification numbers : Object number : NMW A 39453 Number of parts : 1 Identification : ushabti figure Maker Unknown : Egypt 664-525 BC ca, late period Material : powdered quartz composite Description : Probably made from a composition of powdered quartz or sand mixed to a paste with a cement containing an alkaline agent, normally soda. This body is sometimes referred to as faience. The glaze is probably a powder form glaze painted on before firing of either lime and soda or potash and soda with copper providing the turquoise colouration. Measurements : l(cm) 12.7 Description : Ushabti figure, faience Category : Antiquities 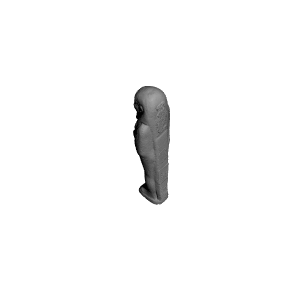 ×
0 collections where you can find Ushabti at The Cardiff Museum, Wales by Scan The World