3D
Scan The World
4,929 views 258 downloads
Community Prints Add your picture
Be the first to share a picture of this printed object
0 comments

Varahi is one of the Matrikas, a group of seven or eight mother goddesses in the Hindu religion. With the head of a sow, Varahi is the shakti (feminine energy, or sometimes, consort) of Varaha, the boar Avatar of the god Vishnu. In Nepal, she is called Barahi.

Varahi is worshipped by all the three major schools of Hinduism:Shaktism (goddess worship); Shaivism (followers of the god Shiva); and Vaishnavism (devotion to Vishnu). She is usually worshipped at night, and according to secretive Vamamarga Tantric practices. The Buddhist goddesses Vajravarahi and Marichi are believed to have their origins in the Hindu goddess Varahi.

According to the Shumbha-Nishumbha myth of the Devi Mahatmya from the Markandeya Purana religious texts, theMatrikas goddesses appear as shaktis (feminine powers) from the bodies of the gods. The scriptures say that Varahi was created from Varaha. She has a boar form, wields a chakra (discus), and fights with a sword. After the battle described in the myth, the Matrikas dance – drunk on their victim's blood. 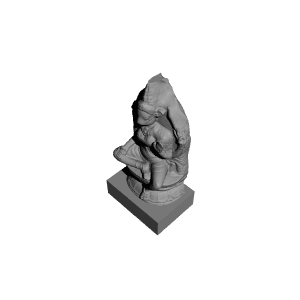 ×
0 collections where you can find Varahi at The Asian Art Museum, San Francisco by Scan The World