3D
Scan The World
3,620 views 244 downloads
Community Prints Add your picture
Be the first to share a picture of this printed object
0 comments

This head was discovered on the island of Anaphe in the Cyclades. It comes from a funerary statue that depicted the deceased wearing a veil. The head was sculpted separately from the body, and then a stone tenon on its base was inserted in a mortise in the bust-a technique that was widely used in the Cyclades and Asia Minor. The high quality of marble sculpting in the late Hellenistic period can be seen in the delicacy of this young woman's face, which is amazingly well preserved.

Discovery on the island of Anaphe

This woman's head came to light in 1823 on the island of Anaphe in the southeastern Cyclades, together with a clothed statue of a woman. The collector Guillaume Alby, who was the French Vice Consul in Santorini, purchased the two pieces. The head became part of the Louvre collection in 1898, as a bequest of Madame Faugère.

This delicate face with its youthful features is reminiscent of certain early Hellenistic creations from the workshop at Kos. It shows the development of marble craftsmanship in Greece during the second half of the third century BC, and it is evidence of that period's prosperity. The woman is depicted wearing a veil; her eyes are half-open and her thin-lipped mouth reveals a slight smile. Her hair, styled in fine, sinuous plaits, is freed from the veil and forms a halo around her oval face.

Originally, this head was placed on a funerary statue depicting the deceased. It was sculpted separately from the body, and then a stone tenon on its base was inserted in a mortise in the bust. This technique was widely used in the Mediterranean basin, particularly in the Cyclades and in Asia Minor. The same system was used, for example, for the heads from Tralles and from Apollonia in Epeiros, also in the Louvre collection. In certain cases, the bust was carved ahead of time, and the head was added at the time of death. 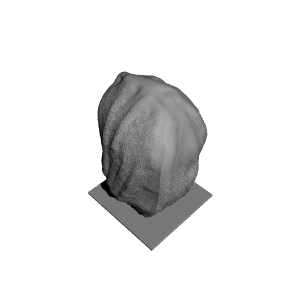 ×
0 collections where you can find Veiled Woman at The Louvre, Paris by Scan The World