Venus (Aphrodite) is the goddess of love. She was depicted in the nude or in various stages of nudity (and painted). The figure is executed in the Hellenistic style and famed for its sensuous appearance. It supposedly lost its arms in a struggle arising between two groups of soldiers who sought to claim it as loot when it was first discovered on the island of Milos. The statue’s fame is partly the result of propaganda. It was discovered in 1820 and acquired by the French state shortly after Napoleon’s fall in 1815, at which point the French had to return another Venus figure, the Venus Medici (KAS1241) to Italy after Napoleon had seized it as spoils of war.

To compensate for their loss the French promoted the Venus de Milo as the loveliest of all antique statues of woman. An Englishman even commissioned a plaster cast as early as 1822, despite the fact that the French and the English were arch-enemies at the time, and today the statue remains far more famous than the Venus Medici.

This is a 3D scan of a plaster cast of the sculpture ‘Venus de Milo (Aphrodite of Milos)’ dated to circa 450 BCE.

The scan is made from the cast (ref. KAS434/1) in The Royal Cast Collection at SMK – National Gallery of Denmark. 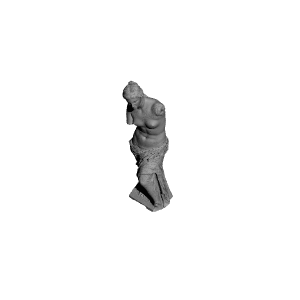 This print is about 1/3 scale of the full-sized original (67cm). I had to chop it into smaller pieces to fit inside my printer volume. I've not filled the gaps and sanded it yet but I like it. I printed the pieces on my Creality Ender 2.

Printed on the Mars 2 Mono with .002mm layer height (standard 608 bearing for scale)