Venus at the Bath at The State Hermitage Museum, St Petersburg

3D
Scan The World
3,824 views 215 downloads
2 collections
Community Prints Add your picture
Be the first to share a picture of this printed object
0 comments

Venus at the Bath at The State Hermitage Museum, St Petersburg

With this sensual yet modest sculpted figure, Falconet captured the moment when a young girl becomes a woman. The pure lines of the slender body and the graceful foot, cautiously extended toward the water, evoke the bather's rather shy innocence. The subtle modulations of the marble impart a shiver to the flesh.

The sculptor has portrayed the moment just before the young girl's bath, as she puts her foot tentatively forward to test the temperature of the water. This graceful gesture was inspired by the Bather, painted in 1725 by François Lemoyne (author of large decorative works such as the ceiling of the Hercules Salon at Versailles), and made popular by engravings.
Falconet captures the moment when a young girl becomes a woman, thereby defining a new feminine aesthetic - long, slender body, narrow hips, sloping shoulders, and small breasts - which was to impregnate his future work and influence his contemporaries. The girl's head is small and her oval face forms a triangle. Her hairstyle was inspired by antiquity: smooth on top, with a central parting. It appealed to Mme du Barry, mistress of Louis XV, who wears the same style in the portrait sculpted by Augustin Pajou in 1772.
The bather is entirely naked, but not immodest. The purity of line, the reserved pose (leaning slightly forward to extend her foot), the graceful position of the arms, and the candid face with lowered eyelids, avoid all vulgarity and keep the spectator at a certain distance.
Yet the statuette is neither cold nor inert. The slightly jutting hip counterbalances the sideways swing of the arms in a dancing movement. And above all, Falconet imparted an impression of living flesh to his sculpture, with the soft shine of the marble suggesting the grain and shiver of the skin.

The Bather was exhibited at the Salon of 1757, at a time when Falconet was nominated director of sculpture at the Sèvres porcelain manufactory with a view to refining its style. The statuette was so successful that it was copied by Falconet himself and by other sculptors such as Jean-Pierre Antoine Tassaert, a Paris-trained Flemish artist who became sculptor to the king of Prussia in 1774. Many casts were made, and from 1758 replicas were produced in biscuit porcelain.
The statuette in the Louvre is a marble copy by Falconet from the collection of Mme du Barry at Louveciennes, where it formed an interesting contrast with the Bathing Venus by Christophe-Gabriel Allegrain (in the Louvre). It was seized during the Revolution, and entered the Louvre prior to 1855.

Falconet's success with this kind of statuette is rather surprising: he was a friend of Diderot, and an austere artist who ascribed a moral purpose to his art in his writings and reflections. He was torn between his ambitions and his patrons: he was a protégé of Mme de Pompadour (1721-1764), favorite of Louis XV and sister of the marquis of Marigny (director of the king's buildings). Falconet therefore adapted his craft to the requirements of a court that was so fond of decorative elegance. 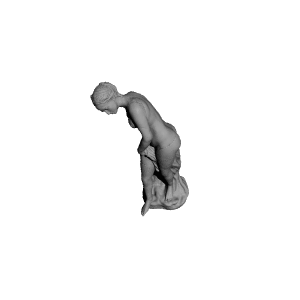 ×
2 collections where you can find Venus at the Bath at The State Hermitage Museum, St Petersburg by Scan The World