3D
Scan The World
2,362 views 121 downloads
2 collections
Community Prints Add your picture
Be the first to share a picture of this printed object
0 comments

A domestic triangle is being played out here. Cupid’s arrows are from both sides being directed at the main figure in the middle of the relief, the goddess of love, Venus. Those coming from the left have been made by her husband, the blacksmith god. They are red hot like the love he feels for her. But Venus is cold and rebuts his approach. This is seen by the fact that she is unconcernedly hardening the points of the arrows by cooling them in a bowl of water. She is more interested in the arrow being pointed at her from the right by the god of war, Mars. For this expresses a love that she reciprocates, something that also emerges from the way in which little Cupid is placed between Venus and Mars. Cupid actually plays the impossible dual role in the drama of being both the creator of the love between Venus and Mars and the result of it – for Venus and Mars are his parents. 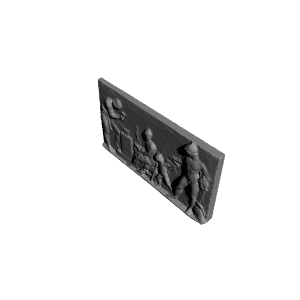 ×
2 collections where you can find Venus, Mars and Cupid in the Smithy of Vulcan by Scan The World