Venus with the Apple

3D
360°
Featured Scan The World
6,550 views 1,131 downloads
6 collections
Community Prints Add your picture
Be the first to share a picture of this printed object
0 comments

Venus with the Apple

All the gods of Classical Greek mythology were invited to a party, except for Eris, the goddess of strife. She had her revenge by throwing a golden apple with the inscription “To the fairest goddess” in among the party guests. But who the fairest of the goddesses was could not be agreed on. Therefore the choice was given to the earthly son of a king, Paris. The choice was between Juno, Minerva and Venus, and it was the latter, goddess of beauty and love, who won and received the apple. The sculpture depicts Venus after the beauty contest. With one hand she grips the clothes on the tree stump to put them back on. With the other she holds the token of beauty up to her admiring gaze.

(Text from The Thorvaldsen Museum, Copenhagen) 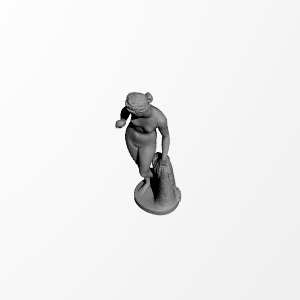