3D
Scan The World
2,809 views 148 downloads
Community Prints Add your picture
Be the first to share a picture of this printed object
0 comments

This sculpture is by François Barois (1656–1726) who was a French sculptor. Barois was born and died in Paris. While residing at the French Academy in Rome he produced a copy of the Kallipygian Venus for King Louis XIV of France, working on it from 1683 to 1686. His Cleopatra Dying was his reception piece for the Académie royale de peinture et de sculpture in 1700; it is now in the Musée du Louvre. Three more of his works are also now at the Louvre: Spring and Authumn (therm figures) and Pomona. Barois was among the large team of sculptors delivering decorative vases and other sculptural elements for the gardens of Versailles. 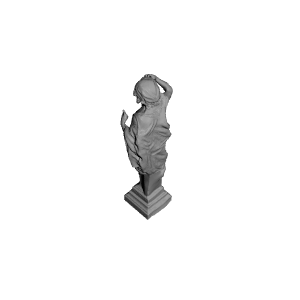 ×
0 collections where you can find Vertumnus at the Jardin des Tuileries, Paris, France by Scan The World