Virgin and Child at The Museum of Fine Arts, Ghent, Belgium

3D
Scan The World
4,408 views 244 downloads
1 collection
Community Prints Add your picture
Be the first to share a picture of this printed object
0 comments

Virgin and Child at The Museum of Fine Arts, Ghent, Belgium

This type of sculptural representation is one of the  central icons for both the Catholic & Orthodox churches. No image permeates Christian art as much as the image of the Mary and child. While Mary may be referred to as "the Madonna" in other contexts, in art the term is applied specifically to an artwork in which Mary, with or without the infant Jesus, is the focus, and central figure of the picture. Mary and the infant Jesus may be surrounded by adoring angels or worshiping saints. Images that have a narrative content, including those of the many scenes which make up the Life of the Virgin, are not correctly referred to as "Madonnas" but are given a title that reflects the scene such as the Annunciation to Mary.

The earliest images date from the Early Christian Church and are found in theCatacombs of Rome. Representation of Mary became more common after she was proclaimed "God-bearer" (Theotókos) at the Council of Ephesus in 431. For over a thousand years, through the Byzantine, Medieval and Early Renaissance periods the Madonna was the most often produced pictorial artwork. Many specific images of the Madonna, both painted and sculptured, have achieved fame, either as objects of religious veneration or for their intrinsic artistic qualities. Many of the most renowned painters and sculptors in the history of art have turned their skills toward the creation of Madonna images. These artists include Duccio, Leonardo da Vinci, Michelangelo, Raphael, Giovanni Bellini, Caravaggio, Rubens, Salvador Dalí and Henry Moore. 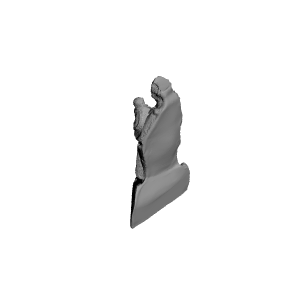 ×
1 collections where you can find Virgin and Child at The Museum of Fine Arts, Ghent, Belgium by Scan The World