Virgin and Child with four angels

3D
Scan The World
2,117 views 50 downloads
2 collections
Community Prints Add your picture
Be the first to share a picture of this printed object
0 comments

Virgin and Child with four angels

This relief depicts the Virgin holding the Child surrounded by four angels.

Three angels between them hold a censer or incense burner, a flaming torch and a crown, while a fourth has given a scroll to the Christ child to read. At the foot of the steps on which they kneel is a prominent carved signature, ‘OPUS MINI’ (‘the work of Mino’).

This relief may originally have formed part of a larger structure which would have made the setting more intelligible and scale of the signature more appropriate. 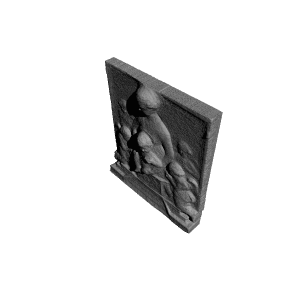