Viria Phoebe and Gaius Virius at The British Museum, London

3D
Scan The World
2,453 views 78 downloads
Community Prints Add your picture
Be the first to share a picture of this printed object
0 comments

Viria Phoebe and Gaius Virius at The British Museum, London

Limestone bust from a Palmyrene funerary relief; double bust of man and his wife; she is veiled with the fillet; wears drop ear-rings and two long curls of hair; holds in left hand distaff and spindle; he wears a toga and holds a strip of writing material in his right hand; inscription; 2 ll. 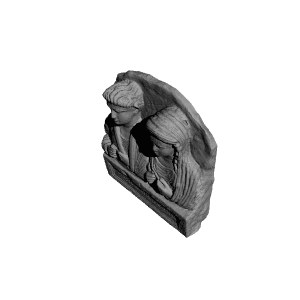 ×
0 collections where you can find Viria Phoebe and Gaius Virius at The British Museum, London by Scan The World