3D
Scan The World
3,806 views 200 downloads
2 collections
Community Prints Add your picture
Be the first to share a picture of this printed object
0 comments

Vittoria della Rovere (1622 – 1694) was Grand Duchess of Tuscany as the wife of Grand Duke Ferdinando II. She gave her husband four children, two of whom would survive infancy: the future Cosimo III, Tuscany's longest-reigning monarch, and Francesco Maria, a prince of the Church. At the death of her grandfather Francesco Maria della Rovere, she inherited the Duchies of Rovere and Montefeltro, which reverted to her second son, Francesco Maria, at her death. She was later entrusted with the care of her three grandchildren. Her marriage brought a wealth of treasures to the House of Medici, which can today be seen in the Palazzo Pitti and the Uffizi Gallery in Florence. 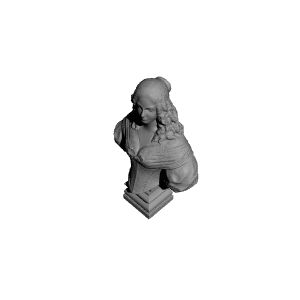 ×
2 collections where you can find Vittoria della Rovere, Wife of Ferdinando II by 3DLirious