This relief was found in the Piraeus.

Dionysos is shown on a kline, holding a rhyton and a phiale. At the foot of his kline stands a woman. Paideria, with her face turned towards a man who holds a theatrical mask in his left hand. Two actors are shown on the left; one holds a tympanon, the other a mask and a tympanon.

The relief was dedicated by actors to the god Dionysos after a theatrical performance, possibly Euripides' Bacchae. 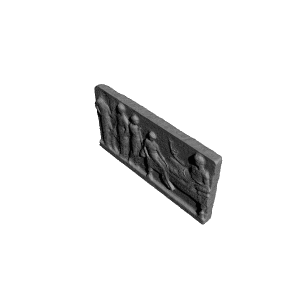