3D
Scan The World
1,339 views 59 downloads
Community Prints Add your picture
Be the first to share a picture of this printed object
0 comments

Votive relief made of marble found in the cave of the Nymphs on Mount Penteli, Attica. The relief has the form of a naiskos set on a cylindrical base. On the baseline on which the figures stand is carved an inscription stating that the relief was dedicated to the Nymphs by Telephanes, Nikeratos and Demophilos.

The three dedicators are depicted at the right, opposite Pan, who holds the pan-pipe, a lagobolon and a hare. The goat-footed god is followed by Hermes and the three Nymphs. 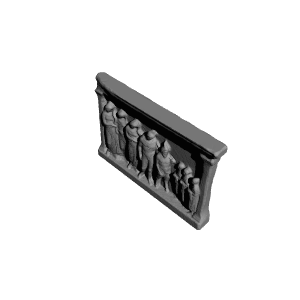