Votive Relief for Cybele, the Mother of the Gods [2]

3D
Scan The World
1,816 views 57 downloads
2 collections
Community Prints Add your picture
Be the first to share a picture of this printed object
0 comments

Votive Relief for Cybele, the Mother of the Gods [2]

Cybele is an Anatolian mother goddess. She is Phrygia's only known goddess, and was probably its state deity. Her Phrygian cult was adopted and adapted by Greek colonists of Asia Minor and spread to mainland Greece and its more distant western colonies around the 6th century BC.

In Greece, Cybele met with a mixed reception. She was partially assimilated to aspects of the Earth-goddess Gaia, her Minoan equivalent Rhea, and the harvest–mother goddess Demeter. Some city-states, notably Athens, evoked her as a protector, but her most celebrated Greek rites and processions show her as an essentially foreign, exotic mystery-goddess who arrives in a lion-drawn chariot to the accompaniment of wild music, wine, and a disorderly, ecstatic following. 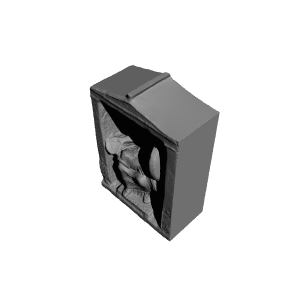 ×
2 collections where you can find Votive Relief for Cybele, the Mother of the Gods [2] by Scan The World