Votive relief to Achilles and Thetis at the Getty Villa, Los Angeles

3D
Scan The World
2,728 views 107 downloads
Community Prints Add your picture
Be the first to share a picture of this printed object
0 comments

Votive relief to Achilles and Thetis at the Getty Villa, Los Angeles

The Greek hero Achilles, identifiable by his shield and helmet, rides with his mother Thetis in a chariot on this fragmentary relief. The chariot slowly converges on a procession of worshippers, who are dressed as travelers, wearing cloaks and wide-brimmed hats. Only seven of these waiting men remain on the broken relief, but originally there must have been about ten. In Greek religion, many heroes were worshipped as a hero, and some scholars believe that in certain places, he may even have been worshipped as a god. In this relief, the group of worshippers bring three rams to sacrifice to Achilles. The relief takes the usual form of a votive monument that was set up as an offering in a religious sanctuary. The dedicators are named in the partially legible inscription at the bottom of the relief, which gives the names of Lakrates and Gephes and refers to the religious association of the Achilleides, who claim to be descendants of Achilles. 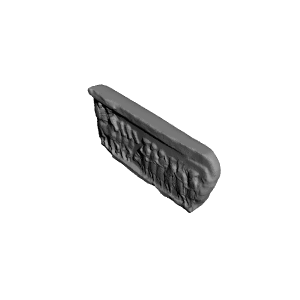 ×
0 collections where you can find Votive relief to Achilles and Thetis at the Getty Villa, Los Angeles by Scan The World