3D
Scan The World
3,386 views 354 downloads
3 collections
Community Prints Add your picture
Be the first to share a picture of this printed object
0 comments

The historical Buddha, born Gautama Siddhartha but more commonly known in Buddhism as Shakyamuni (Sage of the Shakya Clan), renounced his princely life at age 29 after becoming aware of the suffering inherent in human life—disease, aging, and death. Several years later he attained enlightenment and devoted his life to teaching people throughout northern India about a means of escaping from forms of suffering. This was the beginning of what we now know as Buddhism. This sculpture highlights the Buddha as a teacher of the people, walking peacefully with his eyes lowered. It is a distinctly human presentation of Shakyamuni, in contrast to more iconic forms. This sculptural type, closely associated with the Sukhothai Kingdom of Thailand, flourished in the 1300s and 1400s. 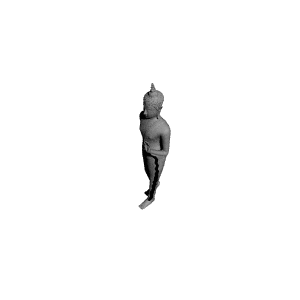 ×
3 collections where you can find Walking Shakyamuni Buddha by artsMIA