3D
Scan The World
3,090 views 156 downloads
1 collection
Community Prints Add your picture
Be the first to share a picture of this printed object
0 comments

This statue, next to a wide variety of other public pieces marks the entrance to Kárász Utca (Szeged). It shows a man playing with a violin, maybe sugesting musians and culture welcoming visitors around the world or the celebration of their arrival.  Szeged is the third largest city of Hungary, the largest city and regional centre of the Southern Great Plain and the county seat of Csongrád county. The University of Szeged is one of the most distinguished universities in Hungary. The famous Szeged Open Air (Theatre) Festival (first held in 1931) is one of the main attractions; which are held every summer celebrated as the Day of the city on May 21.

After the First World War Hungary lost its southern territories to Romania and Serbia, as a result Szeged became a city close to the border, and its importance lessened, but as it took over roles that formerly belonged to the now lost cities, it slowly recovered. The University of Kolozsvár (now Cluj-Napoca, Romania) moved to Szeged in 1921. In 1923 Szeged took over the role of episcopal seat from Temesvár (nowTimişoara, Romania). It was briefly occupied by Romanian army during Hungarian-Romanian War in 1919. During the 1920s the Jewish population of Szeged grew and reached its zenith. Szeged suffered heavily during the World War II. 6,000 inhabitants of the city were killed, the Jewish citizens were confined to ghettos, then taken to death camps, and the Soviet Army occupied the city in late-1944. During the Communist-era, Szeged became a centre of light industry and food industry. In 1965 oil was found near the city; the area now satisfies 67% of the country's oil demand. Today's Szeged is an important university town and a popular tourist attraction and this sculpture is a sample of it; greeting and welcoming the visitors into the town. 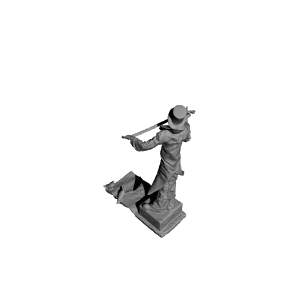 ×
1 collections where you can find Welcome Statue 4 in Szeged, Hungary by Scan The World