3D
Scan The World
5,564 views 313 downloads
Community Prints Add your picture
Be the first to share a picture of this printed object
0 comments

This marble statue of Wilhelm Tell was made by French sculptor Marius Jean Antonin Mercié (Toulouse 1845 - Paris 1916). Wilhelm Tell was a Swiss folk hero who lived in the Canton of Uri in the early 14th centuryand in 1902. Daniel Illfa Osiris (1828-1907), patron of Paris and officer of the Legion of Honor, donated the City of Lausanne this statue of William Tell, in memory of the home for soldiers of the army of Bourbaki interned in Switzerland in 1871.

This dataset has been acquired and processed by the students of the Digital 3D Geometry Course taught by Prof. Mark Pauly at the School of Computer and Communication Sciences at EPFL, Switzerland. Please visit http://lgg.epfl.ch/statues for more information. 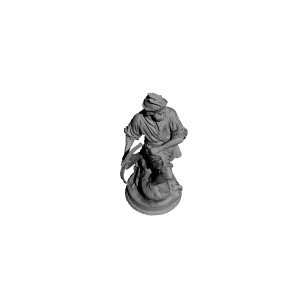 ×
0 collections where you can find William Tell at Lausanne, Switzerland by Scan The World