Winged deity by the sacred tree at The State Hermitage Museum, St Petersburg

3D
Support Free Scan The World
2,490 views 93 downloads
Community Prints Add your picture
Be the first to share a picture of this printed object
1 comments

Winged deity by the sacred tree at The State Hermitage Museum, St Petersburg

Relief from the Palace of Ashurnasipal II at Kalhi, Nimrud.

Ashurnasirpal II succeeded his father, Tukulti-Ninurta II, in 883 BC. During his reign he embarked on a vast program of expansion, first conquering the peoples to the north in Asia Minor as far as Nairi and exacting tribute from Phrygia, then invading Aram (modern Syria) conquering the Aramaeans and neo Hittites between the Khaburand the Euphrates Rivers. His harshness prompted a revolt that he crushed decisively in a pitched, two-day battle. According to his monument inscription, while recalling this massacre he says "their men young and old I took prisoners. Of some I cut off their feet and hands; of others I cut off the ears noses and lips; of the young men's ears I made a heap; of the old men's heads I made a minaret. I exposed their heads as a trophy in front of their city. The male children and the female children I burned in flames; the city I destroyed, and consumed with fire". Following this victory, he advanced without opposition as far as the Mediterranean and exacted tribute from Phoenicia. On his return home, he moved his capital to the city of Kalhu (Nimrud). 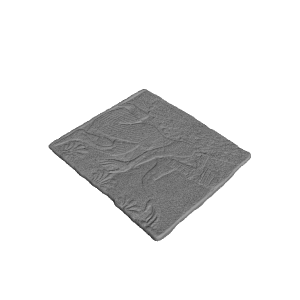 ×
0 collections where you can find Winged deity by the sacred tree at The State Hermitage Museum, St Petersburg by Scan The World