3D
Scan The World
1,946 views 117 downloads
Community Prints Add your picture
Be the first to share a picture of this printed object
0 comments

Yamuna is a Hindu goddess of the river, who is also known as Yami. In Hindu mythology, Yamuna Devi is the daughter of the sun god Surya and his wife Saranyu, and also the sister of the death god Yama. In Vedic tradition, the twins Yama and Yami were the first mortal human pair.

Yamuna first appears in the Ṛg Veda as Yami, where she urges cohabitation with Yama her brother to perpetuate the human race. However, Yama is very religious thus he refuses Yami’s incestuous overture. Therefore, Yamuna portrayed as a goddess of boundless love and passion, who do not follow the dictates of reason in expressing her emotion. This incident did not break their sibling relationship or diminish the affection of Yamuna for her brother. Although Yami’s brother Yama is the god of death, he is considered to be one of the most dharmic entities, becoming also known as the “King of Righteousness” (Haberman 137).

After a long time when Yama visits her sister, she treats him with honour and delightful food which pleased Yami. Then he confers upon her a boon that if any brother and sister come together to worship Yamuna and bathe in her sacred water then they will never see the gates of hell (Kumar, James). 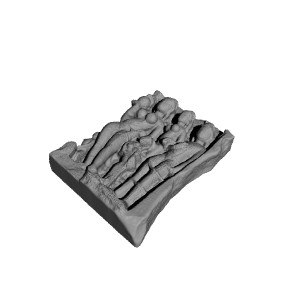 ×
0 collections where you can find Yamuna by Scan The World